This prose rendering by Wesley Callihan of Homer’s great epic is based on the 1883 translation of Andrew Lang, Walter Leaf, and Ernest Myers. Although accurate, the storytelling of the older translation is obscured, sometimes to the point of incomprehension, by the archaic Elizabethan and Sir Thomas Mallory diction and style. This new rendering attempts to preserve the accuracy but make the story far more readable. The text has been revised into contemporary American English while preserving much of the syntactical structure and style. The reading is plain and direct, but still noble; you will find no attempt at casual, much less slangy, diction. This version of the Iliad is more than just a revision—it is a new version based on that older one.

A new prose rendering of Homer’s Iliad by Wesley J. Callihan, containing all 24 books of this great epic.

Preview of the maps from the Introduction 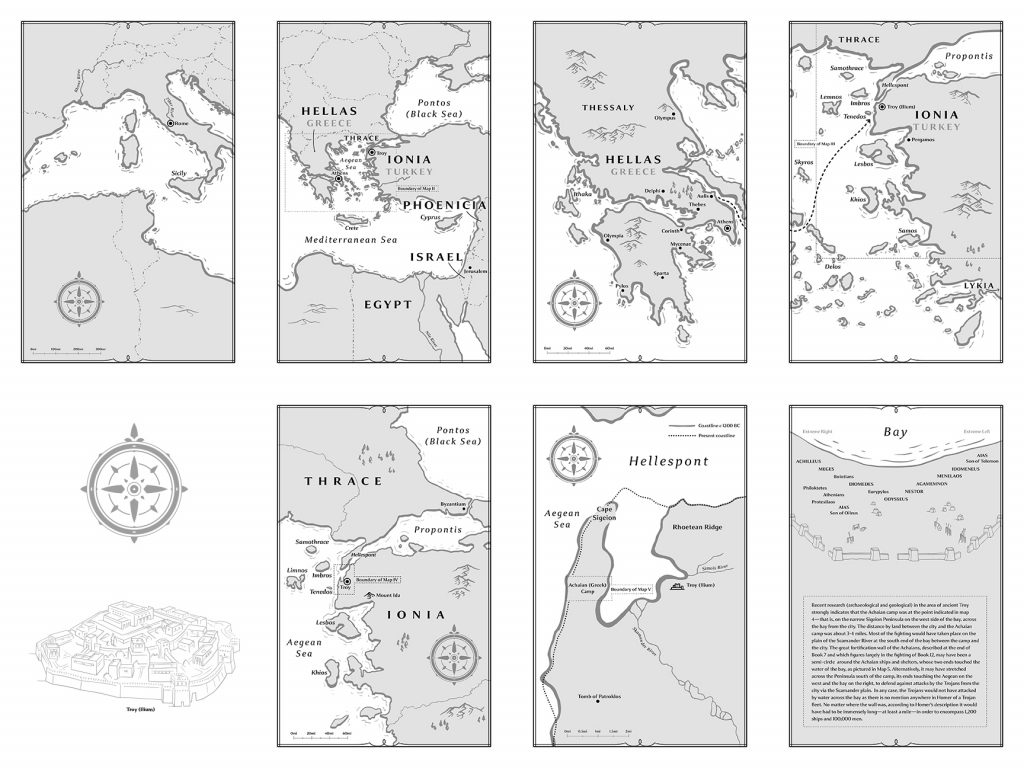 Dr. Dale Grote, from the Foreword:

“One of the many explanations, perhaps the central explanation, is that Homer was a master storyteller. Great stories, it goes without saying are meant not to be read, so much as they are to be heard. We “Greeked” readers says that the theme of both Homeric epics is the kleos of famous men. Our various translations of kleos get close to its general sense: “glory,” “reputation,” “magnificence,” and so on. What they do not capture, however, is that kleos comes from the verb kluō, which means “to hear.” The deeds of Achilles and Odysseus are what people hear about them, and they hear about them in stories. Vergil, it is said, taught us to read, but Homer taught us to listen. But no one will listen if the storyteller is botching his lines. Only a great storyteller can tell a great story in the right way, even if it is written down.

What Wes brings to his adaption of this old translation of the Iliad is the storyteller’s innumerable skills and intuitions about choosing just the right word, establishing an engaging cadence, rounding off phrases, slowing the pace when it needs to be slow and accelerating it when it needs to be accelerated, enriching the words with drama without overdoing it.”

This new prose rendering of the Iliad is based on the wonderful 1883 prose translation by the British classicists and poets Andrew Lang, Walter Leaf, and Ernest Myers. Their translation is accurate and deserves a place of high honor and has always been one of my favorites, but for many people the story-telling is obscured, sometimes to the point of incomprehension, by the archaic Elizabethan and Arthurian legend-like diction and style. Lang, Leaf, and Myers thought it suited the story—and sometimes it does, particularly because Lang was a brilliant story-teller and poet with a marvelous feel for words—but for the modern reader this style mostly creates problems. The Iliad should have a very different feel from the cool, misty, medieval, pre-Raphaelite feel of the Arthurian tale. It is a fast-moving story—hard, bright, gritty, and straight-forward.
This new rendering attempts to preserve the accuracy but make the story far more readable. I have revised the text into contemporary American English (though on occasion archaic words were necessary) while attempting to preserve as much of the basic syntactical pattern and style as possible; sometimes the revision is light, but more often it is radical, and in many places if one were to compare this text with the original Lang, Leaf, and Myers text, the connection might not be apparent at all. At a great many points I have consulted the Greek; I have also consulted other modern English translations, especially those of Green, Lattimore, and Alexander (and sometimes Pope just for fun), but those only when Lang, Leaf, and Myers presented a Gorian knot for which one or more of them were the sword. I have aimed to give a reading that is plain, rapid, and direct, but still noble; you will find no attempt at casual, much less slangy, diction. This version of the Iliad is more than just a revision—it is a new version based on that older one.