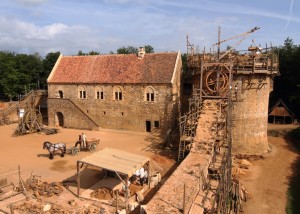 Guédelon: One Man’s Castle in the Sky Gets Down-to-Earth

Have you ever found yourself reading a very old book and wondering “How did they do it all?” The castles, the battles, the art, the clothing? I still can’t read a history book, or even a historical novel, without trying to imagine the historical context around each story. So when I found out about Guédelon, I got really excited! In a century when houses are built in less than a year, and even skyscrapers take only a few years, it’s hard for us to fathom what the architectural feats of yesteryear actually involved. Guédelon bridges the gap between our imaginations and reality. Visionary Michel Guyot and a team of historians, archeologists, stone-masons, wood-cutters, and builders have combined historical study with a kind of reverse archeology to build, from scratch, a medieval castle–using only medieval building techniques! Talk about bringing history to life!

Homeschool field trip anyone? You can read more about their amazing project here: The Guédelon adventure- An introduction

Next Week’s Friday Foray: How the Chrysler Motor Company looked to ancient Rome as they designed their cars.