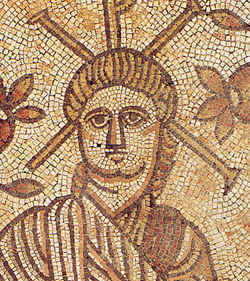 The Germanic presence in Northern Europe posed a significant challenge to Christian missionaries, writers, and poets, which are well described by Peter Brown at the end of his Rise of Western Christendom.

On the one hand, there was the intellectual difficulty. Christianity originally arose within the Greco-Roman sphere, and even though it was Jewish, the Judaism in which Jesus and Paul operated was nestled within the Roman Empire, and had been flavored by compromise and  conflicts with various Gentile powers since the Babylonian exile. Sorting through how Christian faith related to Greek and Roman culture was tricky, but there was at least biblical warrant for seeing the Roman empire as the providential context for the Messiah’s coming and the rise of the church (Daniel 2, 7, eg).

But the empire weakened and “barbarians” invaded, the Germans posed a new problem: How did the Germanic peoples fit into a Christian account of history? Some Christian writers argued that the Lord had raised up the Germanic tribes to discipline a degenerate empire, Christian only in name. Once the Northern tribes converted, though, how were Christians to make sense of the Germanic past? The church fathers had viewed Greco-Roman culture, for all its paganism and flaws, as a preparatio evangelii, a preparation for the gospel. Was Germanic civilization the same? 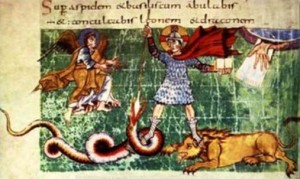 There was also a political dimension to this problem. As Brown points out, northern European kings who promoted Christianity and protected the church depended on genealogy for their legitimacy. Their pagan ancestors gave them legitimacy in the Christian present. They couldn’t simply discard their pagan past without undermining their basis of power. Further, the pagan past, expressed in oral legends and poems – though very little was written – provided a “rule book” for the Germanic aristocracy, embodying the ethos of the ruling class, which was shaped by these poems and sagas and legends as ancient Greeks were educated by Homer.

As Brown puts it,

“They knew very well what it was to be noble. They grew up in an overwhelmingly oral culture which was awash with stories and maxims. These told them how to behave as noble men and noble women. To be noble was to stand out. It was to live well and to be seen by others to live well. It was to foster with gusto the memory of a past which lay on the edge of the Christian present. This was a past which was always a little larger than life. It was a past where human glory, human tragedy, and the working out of human obligations were so much more vivid and so much more clear-cut, so much more brimming over with magnificent lack of measure, than was the grey, Christian present. To be noble was to toast one’s companions with great drinking-horns that carried as much liquor as a present-day bottle of Moselle; to engage in high talk and loud laughter; to listen to the ancient sound of the harpist.”

Germanic rulers had a vested interest in preserving ancient stories and legends. Charlemagne, for instance, saw himself as “Roman,” yet according to his biographer Einhard he had “the unwritten laws of all the tribes that came under his rule to be compiled and reduced to writing. He also directed that the age-old, non-Latin poems in which were celebrated the warlike deeds of the kings of ancient times should be written out and preserved.”

They preserved not only legends about the exploits of ancient kings and warriors but myths about the wars and loves of pagan gods. Brown writes that the gods ” were seen as part of a glorious past. The past still gave a charge to the present. Hence the gods remained. Solemn figures even in their decline, they were like an ancient dynasty which had once ruled the earth until forced to abdicate in favor of the Christ of modern times. Without a touch of the gods ‘in the blood,’ as it were, modern kings could not be great. And if they could not be great, they could not act as effective defenders of the Church.” 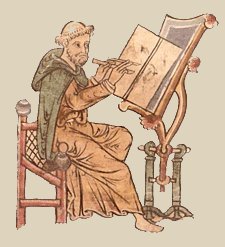 In one of the deepest ironies of Western culture, Christian clergymen and monks were responsible for writing down, often for the first time, the pagan legends and sagas and epics of Northern Europe. Brown puts the point dramatically: “there is not a word which was written about northern paganism that did not pass through the pens of Christian monks and clergymen. Apart from the writers of runes . . . the clergy remained the only literate class in northern Europe. And yet it was the clergy who went out of their way to consign to writing – and so have made available to us – all that we know of the pre-Christian narratives, the poetry, and the laws of Ireland, England, Scandinavia, and Germany.” Brown argues that “those who wrote down the legends and poetry of the pre-Christian past in Ireland, Anglo-Saxon England, and Iceland were not grudging recorders, catching in written words the last vestiges of a pagan mythology doomed to extinction by the coming of the Christian church. The situation was not like that at all. Rather, Christian monks and clergymen should be seen as the last great myth-makers of northern Europe. They transformed a living pagan past, so as to use it in their own, Christian present.”

In this way, the legends and epics of heroic northern Europe became part of the heritage of Christendom. Given the power of the “cult of the classics” in the modern world, we often forget that from the eighth and ninth centuries at least, the culture of Christian Europe drew on Jewish and Christian sources, but was also inspired by Greek, Roman, and Germanic paganism. 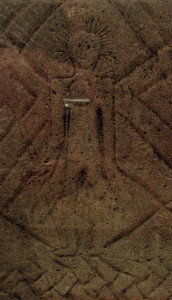 Figure carved on the Frankish grave stele of Niederdollendorf (7th century), known as the earliest material witness of Christian presence in the German Rhineland; the figure is presumably a depiction of Christ as a heroic warrior wielding a lance.

Entering Christendom Germanic culture was considerably modified, as of course was Greco-Roman culture. The portrait of the hero in Beowulf, for instance, is quite other than the image of the heroic warrior in the Greek and Roman epics. Northern Europe also formed a new kind of hero, the saint, shaped by the cult of the saints that challenged the brutal power of heroic warriors.

Beowulf is the most subtle example of the tension between pagan past and Christian present. It is far from the only example, and some lesser-known works have more evangelistic aims. One of these is the remarkable ninth-century Saxon poem, Heiland, “The Savior,” a series of songs that retell the story of Jesus that is translated for the Germanic warrior culture. Jesus is called a “Chieftain” and the disciples are depicted as his earls and warriors. The feasts are Saxon, with ring givers and apple wine, and an angel warns John the Baptist not to drink hard cider all his life. Heaven is “God’s meadow,” and Jesus’ teaching is described as “runes” and his teaching on prayer is described in terms of teaching a new “spell.”

In song 58, during Jesus’ arrest, Peter intervenes to protect him. As one commentator points out, he acts like one of the Nordic warriors called “berserkers” who were transformed by their battle rage into a superhuman incarnation of battle lust. Peter cannot contain his rage and is so angry he cannot speak, and the description is a typical epic battle description with vivid wounds and lots of blood. 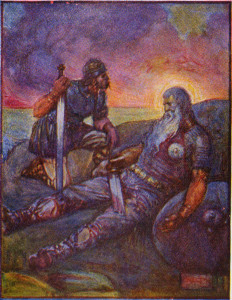 Like Beowulf, Heiland refers occasionally to fate or “wyrd,” the force that determines when a man is going to die. This pagan concept is synthesized with an emphasis on the sovereignty and creativity of God, so that wyrd is transformed into something like natural law: God initiates everything, puts new processes to work, but then they develop according to an immanent power that God has infused into them. Talking about John the Baptist, the poet says that the “power of God. . . .was felt” and Elizabeth became pregnant, but then “the woman awaited the workings of wyrd,” that is, the day of birth.

In his treatment of fate, we can see what the poet is doing. Even as he’s “heroizing” Jesus, he is Christianizing heroism. Within the apparent germanization of the gospel, the poem aims at an evangelization of the Saxons. The Germanic warrior code is all here: Fate (wyrd) has a prominent place, death is certain but the timing is impossible to know. Yet Jesus overcomes fate, as He lays down His life in the way and at the time He chooses, and then overcomes death itself in His resurrection.

In the poem, mortality is linked to blindness, especially blindness about fate and the future. When he heals a blind man in Jericho, it is described as a triumph over fate. Christ cures the blindness that is inherent in the human condition, and this makes him the greatest of all heroes, as He fulfills the hopes and aspirations of Saxon warrior culture. Unlike John’s birth, Jesus’ birth is described without reference to fate at all. Jesus does all things by his own power because He has unique power over all things.

The poet contextualizes the sermon on the mount to the Saxon warrior ethic. While it makes the sermon as palatable to warriors as possible, it also challenges their way of life at a fundamental level. Love for enemies and the prohibition of vengeance, after all, strike at the foundations of the warrior culture.

The poem contains several allusions to Boniface’s felling of the tree of Woden. Words for “felling” trees are used, but instead of trees, pagans are cut down, and the axe is the word of Jesus. Christ is presented as a power greater than Woden. The Spirit-dove on His shoulder rivals and replaces the raven on the shoulder of Woden. Jesus is a teller of secrets and revealer of runes. He walks on water and comes from heaven, like Thor.

Heiland is, in short, not only an example of the synthesis of Germanic-Christian culture, but illustrates some of the ways the church filled the wineskins of pagan heroic culture with the wine of the gospel, until paganism burst open and something new was born.

Peter Leithart, PhD, is President of Theopolis Institute and an adjunct Senior Fellow of Theology at New St. Andrews College, Moscow, Idaho. He is the author of many books, including Brightest Heaven of Invention: A Christian Guide to Six Shakespeare Plays, and lectured for Roman Roads Media’s Old Western Culture series, Rise of England.
He received an A.B. in English and History from Hillsdale College in 1981, and a Master of Arts in Religion and a Master of Theology from Westminster Theological Seminary in Philadelphia in 1986 and 1987. In 1998 he received his Ph.D. at the University of Cambridge in England. He currently blogs at First Things. He and his wife, Noel, have ten children and seven grandchildren.