By Sophia Klomparens
Winner of the 2016 Scribenda Summer Essay Contest

Superhero stories have existed as long as humanity can remember, beginning with epics such as Homer’s Iliad and Odyssey. The larger-than-life characters of Achilles and Odysseus share much in common with the powerful figures of Batman and Superman, the wind-swept shores of Troy echo the dark streets of Gotham, and the sweet island of Ithaca reminds us of the planet Krypton. Clearly, superheroes have been a part of human history for much longer than the term itself has existed. But every superhero story, whether ancient or modern, has one common theme, a theme which has caused millions of people everywhere to love superheroes. These stories all uphold the idea that there is a metanarrative tying the world together, giving meaning and purpose to every human being. 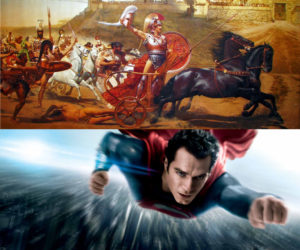 For centuries, mankind has believed in a metanarrative, or an overarching story that governs the history of the world. The metanarrative states that every action has a point to it. There is nothing worthless, no meaningless event. Every person is a character, every happenstance is a plot point. Up until the second half of the 1800s, this prevailing belief brought hope to the soul of humanity. No evil event was so evil that it did not fit in the metanarrative. No occurrence was so bizarre as to be meaningless.

Postmodern philosophy began to destroy this notion, for postmodernism insists that not only is the metanarrative not ultimately good or hopeful, but it does not exist at all. Books like Friedrich Nietzsche’s Thus Spoke Zarathustra encouraged society to reject inherent meaning and instead generate their own meaning. This school of thought has ultimately led to a widescale rejection of moral standards in the modern world. When postmodernism destroyed faith in the metanarrative, it also destroyed faith in truth and goodness.

But what if we were to return to the days of old, before postmodernist philosophy arrived with its grim diagnosis? What if the world of superheroes has more to teach us about reality than the densest existentialist treatise? What if DC Comics’ Batman is a more accurate representation of true heroism than Nietzsche’s Zarathustra?

The best writers of all time have written worlds in which there is purpose in every step, life in every death, hope in every journey—and no world better affirms this outlook than the immense superhero universe. Superheroes constantly remind us that no matter how deep the darkness seems, or how impossible the task appears, good will always—always—triumph over evil. Although superheroes are flawed individuals who struggle with their personal demons, their weaknesses, and their failures, superhero stories affirm that their heroes, though broken, are part of a grand design.

Superhero tales inform us that there is an end to the story of the universe. They insist that light will conquer darkness, courage will conquer fear, and hope will conquer despair. The stories of superheroes, no matter how fantastical, no matter how imaginative, resonate more deeply in our hearts than the worlds of postmodernist literature, simply because they tell us that our story will end, not in tragedy, but in victory.

There is no question that humanity is drawn to these stories. From the Iliad and Odyssey to the comic books of Stan Lee, people love to watch and read about dramatic, large-scale battles between good and evil. There are those who claim that this great love of superheroes comes from our futile hope in a nonexistent metanarrative. But this is where the postmodernists have it wrong. We are not drawn to meaning in stories because we are filled with false optimism. We are drawn to meaning in stories because that is what is real, and that reality of purpose touches our spirits more wholly than any declaration of meaninglessness.

Superhero comics, books, and movies do not tell us merely that there is an enemy, but that this enemy can be destroyed. They do not tell us merely that death is real, but that death can be defeated. They reject the lie of postmodern society that all we will ever know is a meaningless universe. Stories of superheroes tell us that there are things more beautiful, more powerful, and more real than the physical world, and just like Superman is victorious at the end of the movie, these things will be victorious at the end of time.

This vision of resolution found in the superhero universe echoes the words of 1 Corinthians 15, which deliver this promise about the end of our world: “Then the end will come, when he hands over the kingdom to God the Father after he has destroyed all dominion, authority and power. For he must reign until he has put all his enemies under his feet. The last enemy to be destroyed is death.”

This glorious message of hope, which appears so foolish to our postmodern world, comes as second nature to the avid fan of the superhero universe. We who love superheroes believe in the happy ending of history as easily as we believe in the happy ending of The Avengers. Although we may occasionally feel weak, worthless, and beaten down, we know that the superhero will always rise from the ashes to defeat the villain, and that knowledge gives us hope. No matter how many times Batman is broken, he will return to save Gotham. No matter how wicked Lex Luthor’s schemes, Superman will find a way to foil them. No matter how certain defeat seems, Spiderman will triumph. These heroes convince us that we have purpose and meaning. They give us permission to believe in victory.