If you read my last post and are ready for more specifics on the ways in which C.S. Lewis was influenced by Dante Alighieri’s Divine Comedy in the writing of his Ransom Trilogy, you have come to the right place. The first part of this post can be found here and I do recommend reading that first by way of introduction. And off we go!

1 | Devils in Disguise: Hell on Malacandra

As I said in part 1 of this post, there is a sense in which the trajectory of the Ransom Trilogy both parallels and contrasts that of Dante’s Comedy. Heaven and Hell each get thicker as you go through the Trilogy until they meet, at last, on the Silent Planet in the third book, That Hideous Strength. In this part, however, I am focusing on the parallels between the “Inferno,” “Purgatorio,” and “Paradisio” that exist with each book of Lewis’ trilogy. 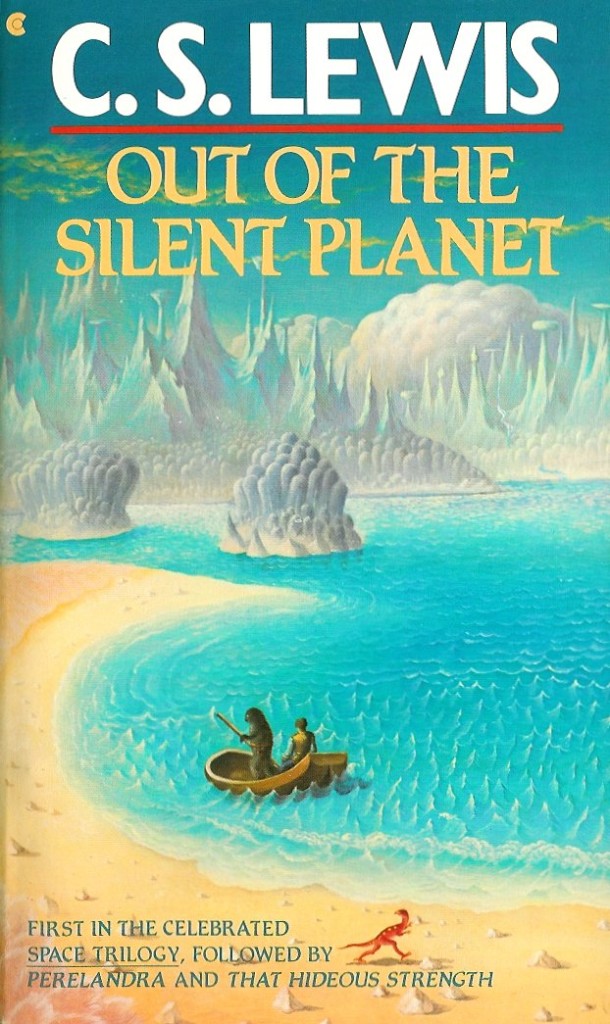 The word “Hell” only occurs once in Out of the Silent Planet, but where it is found is significant. After Ransom is taken to the Oyarsa, Weston and Devine are brought before him as well. Weston tries and fails to communicate with the Oyarsa. But he is so “bent” that he only sees through the lens of his preconceived notions of a “savage” people full of unlearned and uncultivated ignorance. While the sorns, the hrossa, the pfifltriggi, and even the eldila are actually laughing at Weston’s outrageous behavior, he interprets the laughter as roarings and terrible noises that frighten him, and he realizes that his approach isn’t working. Devine, in an outburst of frustration and fear, exclaims “Oh, Hell!” There are a few things we can note about this, but most important is the context in which the exclamation appears. Weston is so bent and stuck in his own mind, glued to his dead philosophies, that he is willing to die for them. Devine, on the other hand, knows nothing but his own greed. He will say anything just to save his own skin. Where Weston will die for a philosophy he loves and a humanity that he hates, Devine’s only love is himself and thus he cannot die for it—to die would be antithetical to the self-preservation which is the driving force behind his self-love. In this scene Lewis paints a Hell out of which neither Devine nor Weston can be rescued, but especially Devine. The Oyarsa specifically says that “this Thin One [Devine] who sits on the ground he [the Bent One] has broken, for he has left him nothing but greed. He is now only a talking animal and in my world he could do no more evil than an animal. If he were mine I would unmake his body for the hnau in it is already dead.” Devine has become so broken, that he is past repair. He is trapped in his fear and deluded by his greed. He has made a Hell for himself and there is no escape.

2 | Purgatory for the Prophet: Directed Love

Judging by the setting of Perelandra–a world uncorrupted by sin– we would expect a parallel with Dante’s Paradiso. But when analyzed with a character-driven perspective, focusing on Ransom in particular, the parallels soon point rather to the second of Dante’s realms—Purgatory.  Ransom, while at first feeling as though he has arrived in Paradise, soon learns the real reason that he has been sent to Perelandra. 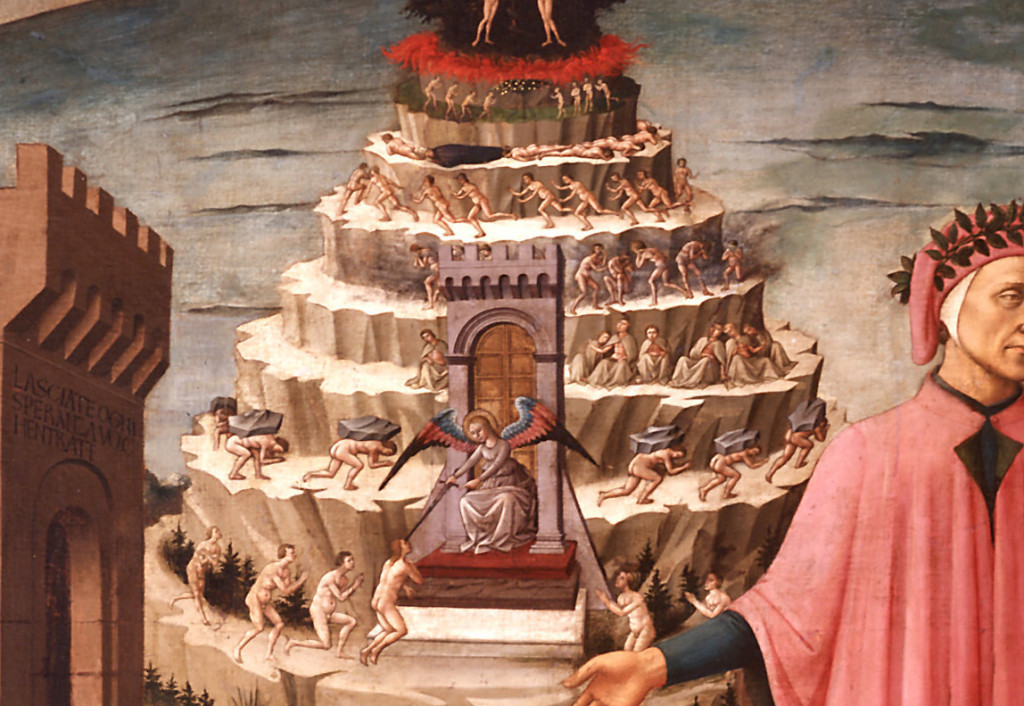 After Weston arrives in his space ship, a second Lucifer falling from the sky like a shooting star out of heaven, Ransom confronts him and witnesses his subsequent “possession” by a devil (likely Satan himself). From there, Ransom is put through the intellectual, emotional, spiritual, and finally physical wringer. He goes through his own personal “purgatory.” His fight with the Un-Man takes him from the lowest, deepest parts of earth, up through the center of the great mountain (a not-so-subtle image of Mount Purgatory). Ransom fights the Un-Man in the deeps until finally he crushes the devil’s head in a fiery chamber and throws his body into the pit. From there Ransom passes from glory to glory until he arrives at the Holy Mountain (another Edenic image). Ransom’s purging has tested his entire being. The planet Venus, seen in its “half-moon” phase.

The imagery used in Perelandra mirrors that of Purgatorio more closely than it seems at first glance. The Pilgrim crosses an ocean in order to reach Mount Purgatory, which is found within the “earthly paradise.” And, perhaps most intriguing of all, one of the first sights that Dante’s Pilgrim sees after he and his guide emerge from the depths of Hell is the planet Venus: “The lovely planet kindling love in man/made all the eastern sky smile with her light,/veiling the Fish that shimmered in her train” (Purgatorio, I.19-21). How much do we read into or out of this? What you cannot deny is that the image of Venus is just that—an image. There are layers of meaning communicated by that image. Dante, like Lewis himself, is not simplistic in his use of symbolism or imagery. Dante uses this sighting of Venus on one level as a beacon of hope. The Pilgrim is encouraged by the sight of the sky after so long in the dark and by the light of Venus in particular as that planet which “kindles love in man.” But that love itself is an image, pointing to the even greater Love that the whole poem is leading towards. Love is the driving force behind Purgatory, as well as its end. Through the purging of all other loves and fears, one learns to love and fear the Author of all, the “Love that moves the sun and other stars” (Paradiso, XXXIII.145). It is fitting that Ransom’s purging should occur on the Morning Star herself, the Lady of Love.

3 | Pulling Down Deep Heaven: Paradise on the Silent Planet

In the last book of the Trilogy, the conflict reaches a climax and Heaven and Hell meet face to face on the Silent Planet itself. In a final battle that combines imagery of the tower of Babel, Samson’s defeat of the Philistines in the temple of Dagon, and a sort of inverted Noah’s ark, creatures from every realm of the medieval cosmos join together to defeat evil. The Silent Planet is silent no longer—it echoes with grunts and roars and chirps and howls. And after the battle is over, Venus is the one to remain. The winds and scents of Perelandra, the Lady of Love, weave themselves around St. Anne’s and Paradise reigns. Heaven and Hell clashed in battle and Heaven had the victory. Now Perelandra, no longer acting as Purgatory but as Eden itself, lingers on after the battle. Ransom completed his Jovial task. We don’t see him return to Perelandra, and that’s the way he wanted it. No drawn out goodbyes, no tears and sorrow—because he did not take the hope with him, but left it on Thulcandra, with Mark and Jane Studdock, now re-united. Once more moved by proper love, Mark and Jane become husband and wife as they were meant to be. The Trilogy ends with an outburst of love between birds and beasts as well as men. Mr. Bultitude the bear finds his Missus. The Dimbles depart together; Ivy is reunited with her husband; all of the beasts are pairing off. This is the work of Venus but it is also a final tie to Dante. It is an echo of the last words of The Divine Comedy, amplified and magnified by a link to all mankind through Ransom’s Jovial mission:

At this point power failed high fantasy
But, like a wheel in perfect balance turning,
I felt my will and my desire impelled
By the Love that moves the sun and other stars.
(Paradiso, XXXIII.142-145).

Ransom’s task is complete. Mars and Venus have been re-united, moved back into proper Love, and hope springs from their union.

The divine dance driven by Love in Dante’s Paradisio.

I hope you enjoyed this blog series. Obviously, this is just barely scratching the surface of this topic, one which I have come to love dearly. There is much more that can (and has!) been said. But I hope that it inspired you, if nothing else, to pick up Lewis’s Ransom Trilogy again with a new perspective and, at the very least, renewed interest.