Vergil’s Aeneid, the epic poem which tells the story of the wanderings of Aeneas on his way to becoming the founder of Rome, is propaganda. But such a statement would not have bothered Vergil a bit. “Propaganda” in Latin simply means “things which ought to be propagated,” and Vergil certainly believed that the values espoused in his story needed to be spread about a bit.

Aeneas was the ultimate Roman, primarily because he revered the gods. “Pious Aeneas” is the epithet used of him throughout the poem, and if anyone missed the point, they were asleep during the reading. Aeneas modeled for the Romans what they all ought to have been, and if Caesar Augustus, who was Vergil’s great patron, dropped less than subtle hints about the duties of poets in influencing culture, Vergil was not reluctant in agreeing. Rome had not been long out of decades of civil war, and Rome desperately needed, and was getting under Augustus, stability and safety, prosperity and peace. Most of all Rome needed a moral compass, and that is what Vergil hoped to provide. He would write an epic poem following Homer’s pattern and, in his hero, would praise the greatness of Rome, glorify Augustus Caesar, and extol the virtues of patriotism, conservatism, devotion to duty, and reverence for the gods of Rome, of whom Augustus was soon to become.

All this he accomplished, and his poem became the benchmark of literature for nearly a millennia and a half. He did not keep Rome from falling into the quagmire of corruption that he and Augustus foresaw, but his work endured like no other. 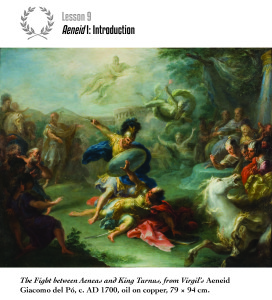 The Aeneid “propagates” other things besides Roman ethics. It carries embedded in it presuppositions about the nature of history and man’s response to it that are radically different from those of the Greeks and especially Homer, whose works so influenced the Aeneid’s form. Behind Achilleus’ glory-seeking, Hektor’s devotion to his city and people, and Odysseus’s drive to return home is the pervasive assumption that the passage of time is essentially meaningless. At the end of the Iliad , when old king Priam has come to Achilleus to plead for the return of Hektor’s body,Achilleus commiserates with his suffering, reminding him that Zeus hands out good and evil mixed, or sometimes just evil, and men can but endure what he deals out, while only the gods live happily. For men like these, lives are lived for the short-term, and what will happen has happened before. All things change, but the change is fundamentally meaningless, and consequently all things stay the same. History is but “meaningless flux.” Fate is what the gods do to a man, and his response therefore is simply to do what he pleases and suffer his fate. Fate will happen, no matter what he does; there is no question of obedience. 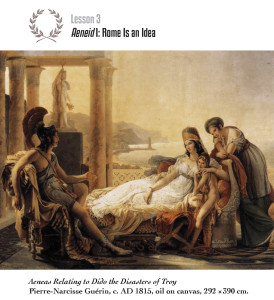 On the other hand, Aeneas’ drive to fulfill his destiny implies at least two changes in the way we are asked to view history. First, man must respond to his destiny, when the gods reveal it, by obeying. His fate may not be fulfilled, it seems, if he simply does what he pleases, and so he must subordinate his immediate desires to the higher duty to the future, a future he may never see himself. At one point in his wanderings over the Mediterranean, Aeneas finds himself falling in love with Queen Dido of Carthage and is tempted to stay with her rather than continue seeking for the land where he is destined to found the nation of Rome. The gods remind him not only of his destiny, but of the necessity of his obedience, and he goes. Odysseus, who also got sidetracked with women, would not have understood this response to fate. Odysseus moved on simply because he could, not because he had any idea of helping fate.

Second, history is teleological. It has a purpose, a goal; time has meaning. It is not cyclical, but it progresses upward, and things become greater and higher. The gods drive man onward, and as he obeys, he becomes a great people. Achilleus did not fight, nor Hektor defend, because of any potential progress in the future; Achilleus fought because he had always fought and because that was how men gained glory. Hektor fought because he had a wife and child whom he loved. But Aeneas struggled on against the obstacles Juno constantly threw in his way because the gods had told him that, if he succeeded, a great nation would come from him, with countless descendants and glorious ones. He subordinated himself to the greater glory of future Rome, knowing he would never see it, and so Rome was founded.

Because Vergil’s poem was so important during the rest of the Empire’s history and throughout the Middle Ages, the structure of his poem standardized the epic form embodied in Homer. Vergil was the vehicle by which Homer’s peculiarities became literary conventions. After Vergil, everyone who wrote an epic began it with an invocation to the muse of epic poetry, launched the story in medias res , included epic similes, had his hero journey to the underworld, had a catalog of nations or men, had funeral games, and so on. These elements exist because Homer did them, but they are characteristics of epic poetry because Vergil carried them on.

Vergil was called the Magus by medievals because he was so learned and they were so ignorant; by comparison he seemed to them to be a man of supernatural wisdom and power. It has been some time since anyone felt that way about him; nevertheless, he is still deservedly recognized as one of the four or five greatest poets in our western tradition.

Learn more about the Aeneid from Wesley Callihan in the unit The Aeneid in the Old Western Culture curriculum.

Wesley Callihan grew up on a farm in Idaho and graduated with a degree in history from the University of Idaho. He has taught at Logos School, New Saint Andrews College, and Veritas Academy. In 1997 he founded Schola Classical Tutorials where he teaches online classes on the Great Books, Astronomy, Church History, Greek, and Latin.
He is now working with Roman Roads Media to produce Old Western Culture, a 4-year integrated humanities curriculum designed to equip homeschoolers and their families with the tools to tackle the Great Books that shaped Western Civilization.