Lucius Quinctius Cincinnatus was a Roman farmer in the 5th century B.C. Because Rome was in dire need of a leader to fight off invaders, the Roman Senate asked Cincinnatus to be “Dictator” for a term of six months. The Roman Senate was worried that the person they chose as dictator might not return the power to the Senate when the time was up. But the reason they chose Cincinnatus was that he was known to be a man of virtue, who had proven himself as a consul. After two weeks, he had taken care of the situation with their enemies, leading the charge himself, and immediately handed power back to the Senate. 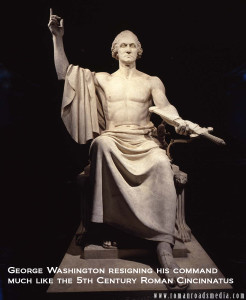 George Washington was compared to Cincinnatus on many occasions. This comparison inspired many works of art. In the paintings and sculptures you see a George Washington dressed like an ancient Roman, toga and all! The anachronism in the art shows just how closely the American Founders wanted to connect themselves to the Roman Republican ideals.

Carl Richard, in his book The Founders and the Classics, points out how this affected the interaction between George the III during the American War for Independence:

“An astonished western world agreed with the judgement of George III. Unable to believe that any military leader would voluntarily surrender such power, the kind scoffed that if Washington resigned his commission, “He will be the greatest man in the world.” The king’s confusion epitomized his inability, throughout the Revolutionary conflict , to comprehend the enormous emotional power which classical republican ideals wielded over American minds” (p. 71).

He goes on to say that Washington did not want to declare defeat at the worst moments of the war because he did not want to lose the privilege of laying down his arms in imitation of Cincinatus. And that is precisely what George Washington did. He resigned from public life after the war, when he could have used his influence to become very powerful, and moved to his “villa” in the country, a term Washington used only after his retirement, most probably making an allusion to Cincinatus in doing so.

Hear Wes Callihan tell the fascinating story in this excerpt from The Historians.