John Adams wrote to his son, John Quincy Adams, soon after the Declaration of Independence, exhorting him to read Thucydides as a way to be best prepared for the days ahead of him as a leader. Here is the full letter:

As the War in which your Country is engaged will probably hereafter attract your Attention, more than it does at this Time, and as the future Circumstances of your Country, may require other Wars, as well as Councils and Negotiations, similar to those which are now in Agitation, I wish to turn your Thoughts early to such Studies, as will afford you the most solid Instruction and Improvement for the Part which may be allotted you to act on the Stage of Life.
There is no History, perhaps, better adapted to this usefull Purpose than that of Thucidides, an Author, of whom I hope you will make yourself perfect Master, in original Language, which is Greek, the most perfect of all human Languages. In order to understand him fully in his own Tongue, you must however take Advantage, of every Help you can procure and particularly of Translations of him into your own Mother Tongue.
You will find in your Fathers Library, the Works of Mr. Hobbes, in which among a great deal of mischievous Philosophy, you will find a learned and exact Translation of Thucidides, which will be usefull to you.
But there is another Translation of him, much more elegant, intituled “The History of the Peloponnesian War, translated from the Greek of Thucidides in two Volumes Quarto, by William Smith A.M. Rector of the Parish of the holy Trinity in Chester, and Chaplain to the Right Honourable the Earl of Derby.”
If you preserve this Letter, it may hereafter remind you, to procure the Book.
You will find it full of Instruction to the Orator, the Statesman, the General, as well as to the Historian and the Philosopher. You may find Something of the Peloponnesian War, in Rollin.
I am with much Affection your Father,
John Adams

Wes Callihan guides students through Thucydides’ great work, “History of the Peloponnesian War,” the same book mentioned above, in The Histories unit of Old Western Culture. 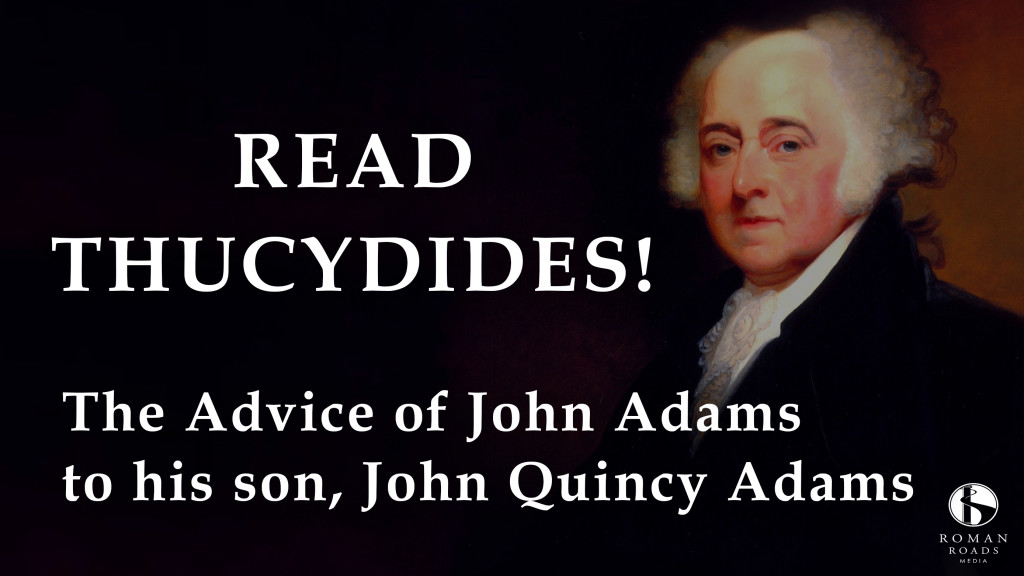