Excerpt from the “Guide to the Art” booklet which accompanies The Histories (Old Western Culture curriculum).

The words of John Adams in a letter to his wife Abigail the day after the signing of the Declaration of Independence are often quoted by Patriots on the 4th of July, and should be! But the full context of that letter shows a more solemn side that we don’t quote as often. In this letter, dated July 3rd (the Constitution was actually signed July 2nd), John Adams says,

“When I look back…and recollect the series of political Events, the Chain of Causes and Effects, I am surprised at the Suddenness, as well as the Greatness of this Revolution. Britain has been fill’d with Folly, and America with Wisdom, at least this is my Judgement. —Time must determine.”

After stating that he believes American may endure worse hardships ahead, he continues,

“The Furnace of Affliction produces Refinement, in States as well as Individuals. And the new Governments we are assuming, in every Part, will require a Purification from our Vices, and an Augmentation of our Virtues or they will be no Blessings. The People will have unbounded Power. And the People are extremely addicted to Corruption and Venality, as well as the Great. —I am not without Apprehensions from this Quarter. But I must submit all my Hopes and Fears, to an overruling Providence, in which, unfashionable as the Faith may be, I firmly believe.”

This shows the great solemnity with which he and the other Founders approached the signing of the Declaration of Independence. This was not done lightly. Adams is not only describing the raw cost of freedom, but also its foundation: a virtuous people.

It is in a letter dated the same day, also to his wife Abigail, that he ends with the famous prediction about how America will celebrate (and ought to celebrate!) what has become Independence Day. But even this letter starts with a solemn tone, in which he speaks of the delays in the signing, caused by malaria among the troops. His conclusion about this delay was as follows:

“Time has been given to the whole People, maturely to consider the great Question of Independence and to ripen in there Judgements, dissipate their Fears, and allure their Hopes, by discussing it in News Papers and Pamphletts, by debating it, in Assemblies, Conventions, Committees of Safety and Inspection, in Town and County Meetings, as well as in private Conversations, so that the whole People in every Colony of the 13, have now adopted it, as their own Act.” 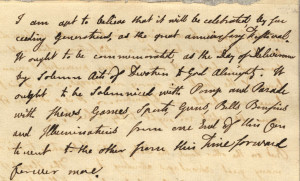 Part of the original letter of John Adams to his wife Abigail, talking about celebrating Independence.

It is only then that he concludes his letter with his famous statement about the celebration of Independence among future generations:

But the Day is past. The Second Day of July 1776, will be the most memorable Epocha, in the History of America. I am apt to believe that it will be celebrated, by succeeding Generations, as the great anniversary Festival. It ought to be commemorated, as the Day of Deliverance by solemn Acts of Devotion to God Almighty. It ought to be solemnized with Pomp and Parade, with Shews, Games, Sports, Guns, Bells, Bonfires and Illuminations from one End of this Continent to the other from this Time forward forever more.
You will think me transported with Enthusiasm but I am not. —I am well aware of the Toil and Blood and Treasure, that it will cost Us to maintain this Declaration, and support and defend these States. — Yet through all the Gloom I can see the Rays of ravishing Light and Glory. I can see that the End is more than worth all the Means. And that Posterity will tryumph in that Days Transaction, even altho We should rue it, which I trust in God We shall not.

Happy 4th of July! May your festivities by both joyous and solemn as we ponder the sacrifice that gave us our freedoms, and the waning of those freedoms by a nation quickly abandoning virtue, and no longer submitted to the Almighty. Pray for Reformation, and celebrate in Faith!