Here are two pages from the “Guide to the Art” of our first unit of Old Western Culture, The Epics. The Iliad and The Odyssey inspired a wealth of art during the Renaissance, and the 117 classical paintings woven into The Epics barely scratch the surface. 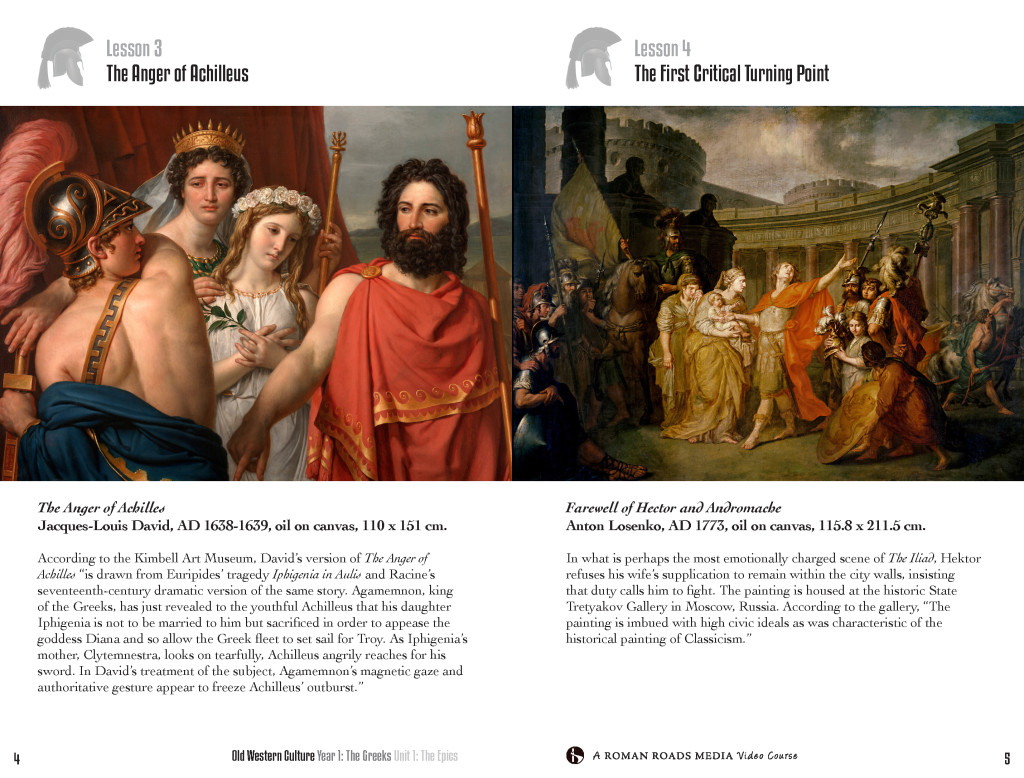 LEFT: THE ANGER OF ACHILLES.
According to the Kimbell Art Museum, David’s version of The Anger of Achilles “is drawn from Euripides’ tragedy Iphigenia in Aulis and Racine’s seventeenth-century dramatic version of the same story. Agamemnon, king of the Greeks, has just revealed to the youthful Achilleus that his daughter Iphigenia is not to be married to him but sacrificed in order to appease the goddess Diana and so allow the Greek fleet to set sail for Troy. As Iphigenia’s mother, Clytemnestra, looks on tearfully, Achilleus angrily reaches for his sword. In David’s treatment of the subject, Agamemnon’s magnetic gaze and authoritative gesture appear to freeze Achilleus’ outburst.”
RIGHT: FAREWELL OF HECTOR AND ANDROMACHE.
In what is perhaps the most emotionally charged scene of The Iliad, Hektor refuses his wife’s supplication to remain within the city walls, insisting that duty calls him to fight. The painting is housed at the historic State Tretyakov Gallery in Moscow, Russia. According to the gallery, “The painting is imbued with high civic ideals as was characteristic of the historical painting of Classicism.”