CiRCE Institute posted this great article, “The Odyssey – On Dangerous Women & Their Looms.”

Here is an excerpt:

“Penelope is no “black widow”, weaving the destruction of her husband. She is no Clytemnestra. Penelope is crafty and clever, perhaps more so than any other woman in the story, but she protects her husband and her household. Penelope’s loom was a tool of death, but only for the wicked suitors who ate up the wealth of Odysseus and sought to steal his wife. Her loom was an instrument of life for her long-awaited Odysseus, whose return marked triumph over war, temptation, forgetfulness, and death.”

The photo below, from the “Guide to the Art” in The Epics, depicts the scene mentioned in the article, of Penelope unraveling her web. 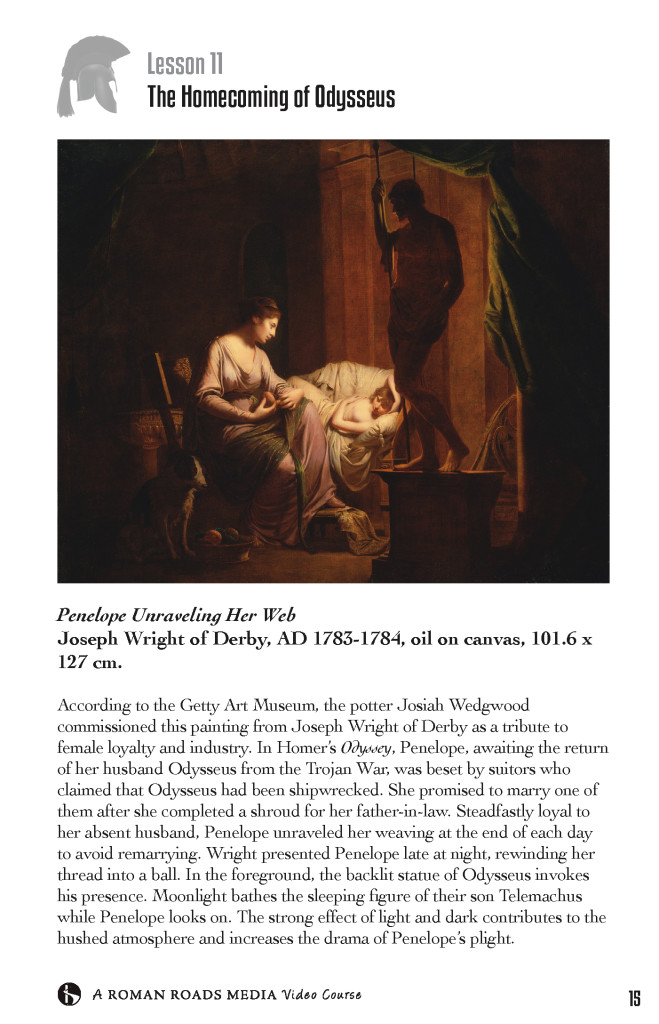 According to the Getty Art Museum, the potter Josiah Wedgwood commissioned this painting from Joseph Wright of Derby as a tribute to female loyalty and industry. In Homer’s Odyssey, Penelope, awaiting the return of her husband Odysseus from the Trojan War, was beset by suitors who claimed that Odysseus had been shipwrecked. She promised to marry one of them after she completed a shroud for her father-in-law. Steadfastly loyal to her absent husband, Penelope unraveled her weaving at the end of each day to avoid remarrying. Wright presented Penelope late at night, rewinding her thread into a ball. In the foreground, the backlit statue of Odysseus invokes his presence. Moonlight bathes the sleeping figure of their son Telemachus while Penelope looks on. The strong effect of light and dark contributes to the hushed atmosphere and increases the drama of Penelope’s plight.