Four Guys in a Boat

Four Guys in a Boat: What’s All That About?

“When does a man quit the sea?” asked E.B. White. “Does he quit while he’s ahead, or wait till he makes some major mistake?”

Skipper and the crew seem to thrive pushing for the latter.

Sailing alongside killer whales. Flying the Canadian flag upside down while coasting blithely into Victoria. Debating who gets left behind the day they have to squeeze into the three-man lifeboat. Interrogated by the US Coast Guard. Running aground. Losing themselves in blinding sea fog. Standing rapt beneath Taps’ benediction as the American flag retires in Roche Harbor.

For Kjell, John, Ed, and Skipper, sailing is about far more than simply passing time on the water. It’s about the love of familiar faces and the thirst for new horizons—on land or sea. It’s about the bond created by the sheer accumulation of memories, just a few of which are in this book.
What else could explain why four grandpas (all north of sixty) spend four days navigating the San Juan islands every summer for fifteen years, when only one of them grew up sailing and he (given the opportunity) might cheerfully capsize the boat?

Meet Kjell, the oldest, shortest, feistiest member of Skipper’s crew. He grew up sailing the Norwegian fjords, and he once chucked a rock at a Nazi, so nothing scares him. Stronger wind, bigger waves, thicker fog—Kjell insists they can take it all. Thankfully, Skipper doesn’t listen to this cocky Viking.

Meet John : the handsome youngster! He’s in charge of the most acrobatic physical demands of the yearly voyage. Claim to fame: He once appeared on an episode of My Three Sons. (Okay, so he’s not that young.) His driving skills would also convert the stoutest atheist real quick.

Meet Eddie: famous jokester and raconteur extraordinaire. Also, the funniest man on the boat (or at least he thinks so). It’s true what Skipper says: When Ed grins, you know it’s gonna be a good day! (Pic was taken earlier this week as the crew battled rough seas towards Victoria, BC. They ended up turning around and sailing back. That’s a first!). 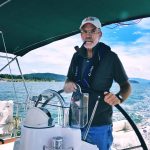 Meet “Skipper”: he is the resident adolescent in charge of each voyage’s most acrobatic feats. He once appeared in an episode of My Three Sons, but his real passion is for Logos School, where he is the director of activities and also coaches the high school track team. His job is to tell Kjell what Kjell really wants in life. John is married to the fabulous Brenda and probably still gets carded.

Kjell Christophersen, economist and king, grew up sailing the Norwegian fjords. He has survived more near-death experiences than the other sailors combined, and if he were to have his way, each voyage would get considerably closer to death than they already do. He is recently retired from Emsi, and is married to the lovely Judi, who should have warned Skipper to up the insurance.

John Carnahan is the resident adolescent in charge of each voyage’s most acrobatic feats. He once appeared in an episode of My Three Sons, but his real passion is for Logos School, where he is the director of activities and also coaches the high school track team. His job is to tell Kjell what Kjell really wants in life. John is married to the fabulous Brenda and probably still gets carded.

Ed Van Nuland fell in love with the sea as a landlocked third-generation copper miner. He is the crew’s mental librarian and raconteur extraordinaire, quoting poetry and spouting Shakespeare with his radio celebrity voice. He’s a fan of bad ice cream and tends to get toothpaste and hydrocortisone mixed up. He is married to the adventurous Janet.

John “Skipper” Sawyer is the one who started the whole tradition by purchasing a sailboat when he had no clue how to sail. He teaches driver’s ed (among other things) and is a former Marine, so nothing scares him, not even John Carnahan’s driving. He’s in charge of getting everyone home alive despite Kjell’s best efforts. He is married to the blonde and gentle Jan, with whom he first learned to weigh anchor and sail towards adventure.

G.M. Burrow hates putting her face in the water and has never stepped foot in a sailboat, but she loves stealing stories and living vicariously, so that’s okay. She’s been writing real and made-up adventures since she was seven. She loves the Alps, adrenaline, and taking her eight nieces and nephews on merry escapades where hopefully at least one kid believes they’re going to die.